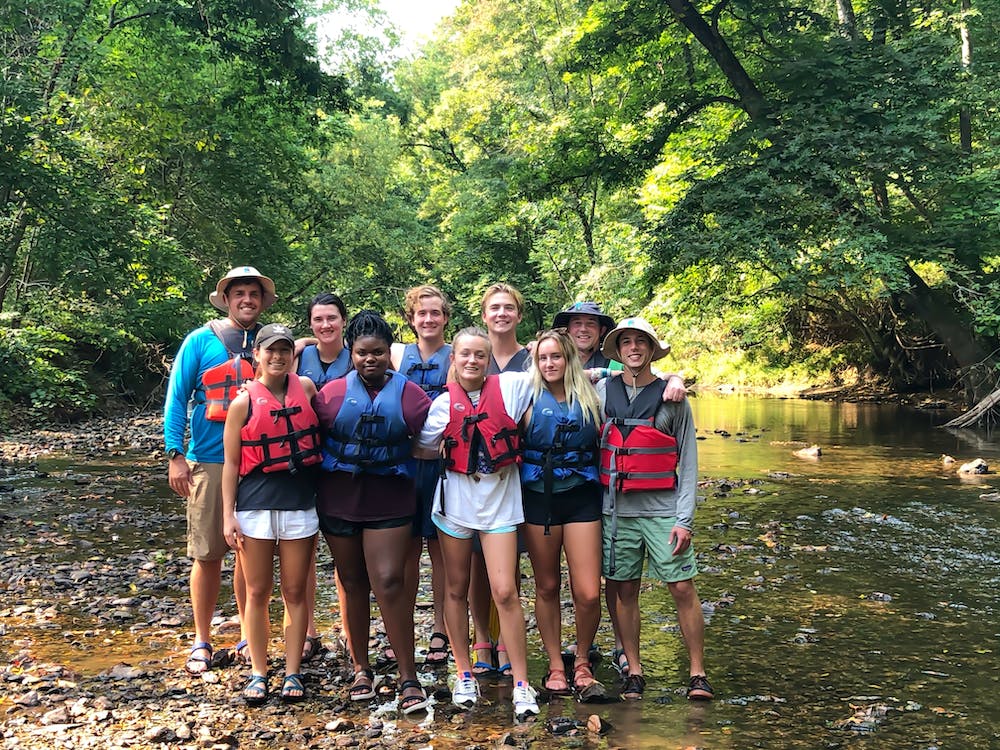 Each summer Camp Cheerio employs over 140 counselors and support staff who are led by 7 full-time directors. On opening days in the summer you will see them either in the gym or out and about camp ensuring that check-in goes smoothly for everyone. During the summer, please call our camp office at 336-363-2604 if you have any concerns. During the off-season they can be contacted in the High Point office (336-869-0195) to answer any questions you have about your child’s upcoming camp experience.

Michaux became the Camp Director in 1996, but he has been involved with Cheerio since long before that as both a camper and staff member. In his free time you can usually find Michaux playing golf or soccer, or spending time with his wife and 2 sons.

Shane’s Cheerio Journey started as a camper in 1992 and his life has been changed and shaped by his Cheerio experience in countless ways since. He studied Parks and Recreation Management at NC State University and met his wife Cheri while in school there. They have two children, Adaline and Benton, who love being campers at Cheerio as much as Shane did 30 years ago. When not at camp Shane enjoys cycling, whitewater paddling, and spending time with family.

Michelle first joined the Cheerio family in 1989 as a senior counselor, and has served Cheerio in a variety of capacities over the years. By far her favorite role is her current one: building meaningful relationships with our staff and helping them to achieve their full potential. In her free time Michelle enjoys reading, playing games, laughing, and hanging out with her friends and family.

Martyn joined the Cheerio family as a counselor in 1996. In addition to planning and preparing the delicious menus in our dining hall, Martyn is responsible for all of the great Cheerio gear in the camp store, and is the judge of everyone’s favorite camp competition: Cabin Cleanup!

Stephen is our Full Time Events and Media Director. He joined our team in January 2020 after graduating from West Virginia University. Stephen is known throughout camp for his funny, creative, and kind personality, always there to lend a hand. He has the gift of creating laughter, whether he is telling a joke, inventing a unique character, or even by making robot noises. Stephen was a camper for 9 years and followed by serving Cheerio as a Junior and Senior Counselor, Target Sports Director, Events Director, and CIT Director. He is extremly excited to be on board to develop the creative and entertaining side of camp that he has embraced himself as a camper and staff for so many years.

Kiran Johal is our Personel and Staff Director, specifically hired to help in hiring staff, overseeing Support Staff and CREW during the summers. Kiran was born and raised in High Point NC and attended UNC Charlotte earning a degree in Criminal Justice and Psychology. From a very young age, Kiran knew she wanted to work with children. As a part of a large family, she grew up helping with younger cousins and siblings. After her Freshman year in college, Kiran worked as a Senior Counselor at Cheerio. She has worked the last three summers as a Counselor and Head Counselor. She loves working with staff and helping them become a better version of themselves. She is excited to continue this journey Full Time.

Meredith Roethling is our CIT Director. She grew up in Goldsboro NC and graduated from UNC Chapel Hill with a degree in Exercise and Sports Science. Meredith is the proud owner of her dog, Gracie and has enjoyed training her. She has worked in many capacities at Camp Cheerio: Junior and Senior Counselor, Head Counselor, Support Staff Director, Riding Staff, and CIT Director. Obviously Cheerio is very important to Meredith and having the opportunity to work full time is a dream come true. We are so happy to have her!

Eric Orcutt is our Program Director. He moved to High Point NC when he was 4 years old, after living in Syracuse, NY, and San Antonio, TX. Eric is a huge fan of Syracuse basketball, the Buffalo Bills, and all things Marvel. After many summers at Cheerio as a camper, Eric returned in 2015 as a Senior Counselor. He has been there ever since serving as a Head Counselor, Program Director, and worked on the Fall Adventure Education Staff. Eric graduated from UNC- Charlotte with a degree in Elementary Education. He is thrilled to be working with children and especially at a place so close to his heart, Camp Cheerio

Chances are if you call the Cheerio office, the friendly voice that answers the phone will belong to Terri. She serves as the Director of Registration for Camp Cheerio. She oversees camper registration and payments for Traditional Camp and Cheerio On The New River. Terri joined the Cheerio family in 2014. Two of Terri’s children are former Cheerio campers.

Kathy’s first experience with Camp Cheerio was as a participant at our family camp, and she immediately fell in love with it. She joined the staff in November of 2014 and assists with the registration process for our many campers and groups. Outside of Cheerio Kathy enjoys spending time with her husband and 2 sons.

Dedicated and experienced leadership is the key to successful camping. At Cheerio, we consider our counselors to be our most important asset. We maintain an overall counselor to camper ratio of better than 1:4. Our high ratio ensures each camper receives positive, personal interaction with their counselors each and every day.

How We Select Our Counselors

Only qualified college students and graduates who possess outstanding leadership abilities and experience in working successfully with children are selected as our Senior Counselors. Junior Counselors, held to the same high standards, are a minimum rising high school senior. We personally interview each candidate at Cheerio, secure a minimum of three personal, written references, and perform extensive background checks for all new counselors. Cheerio chooses only those who exhibit the high qualities consistent with the YMCA philosophy.

Learn about becoming a counselor on our Employment page.

Next: How Cheerio Cares for You